Skip to Main Content
It looks like you're using Internet Explorer 11 or older. This website works best with modern browsers such as the latest versions of Chrome, Firefox, Safari, and Edge. If you continue with this browser, you may see unexpected results.

PC Tethered headsets require a wired connection to a PC to operate. Some require wired external sensors as well. They can be difficult to setup, requiring a defined space within which the VR experience will take place. They are generally a bit more powerful, utilizing the PC's graphics card in rendering the VR experience. However, being premium headsets aimed at a smaller audience, programming is also a bit more limited since it must meet higher quality demands to be accepted on these premium platforms.

How to Use This Guide 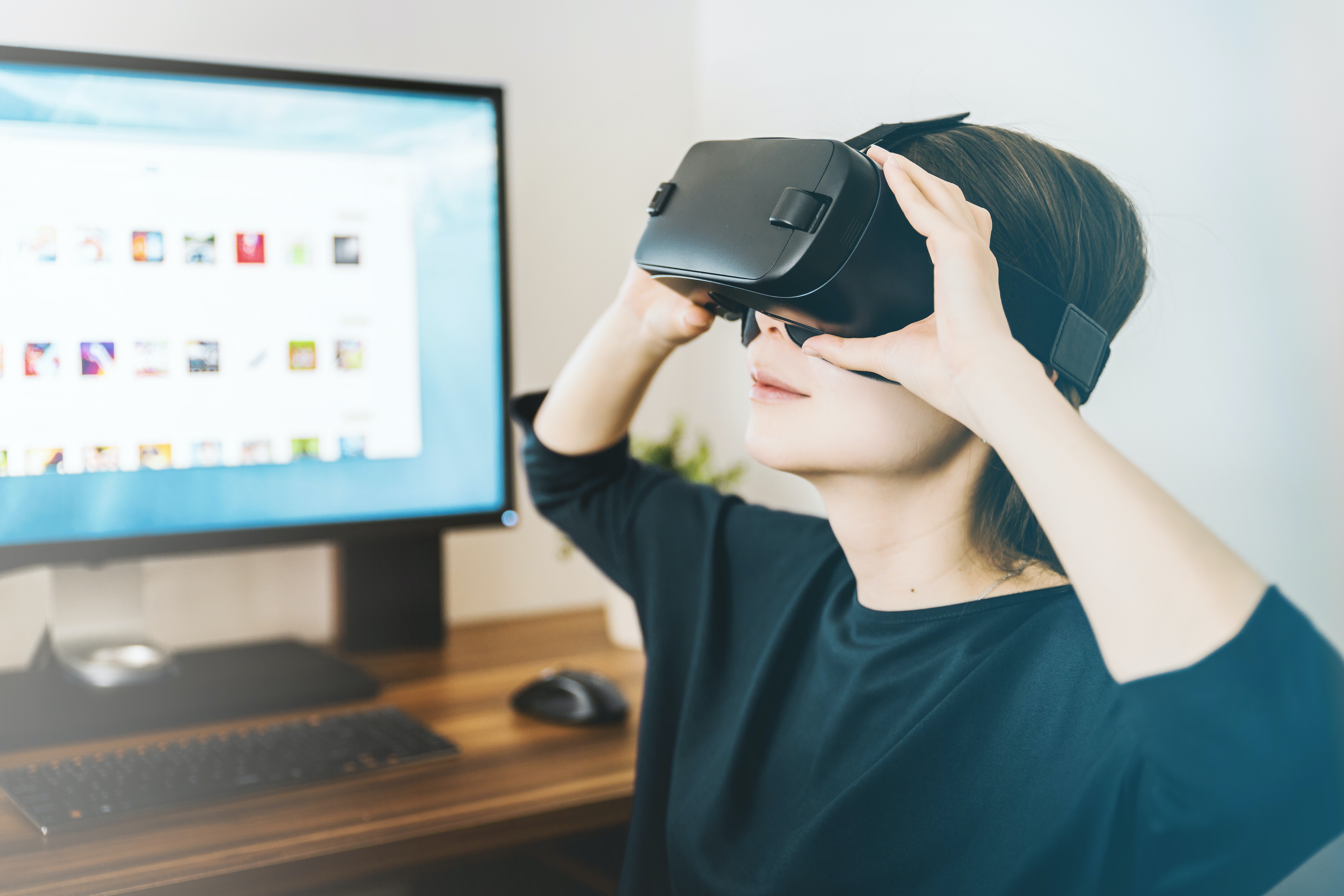 Photo by JESHOOTS.COM on Unsplash

This guide provides a list of applications and software from a wide range of Virtual Reality platforms. It also provides a brief overview of the different platforms available for consideration for use in your courses. The information provided should help you decide on the best platform for your course needs as well as assist you in selecting the best VR application to meet your needs. When you are ready to begin evaluating the software for yourself, contact Brandon Perkins or Michael Fetters. They manage the VR application acquisition and VR headset checkout process.

A Brief History of Virtual Reality

In 1935 American science fiction writer Stanley Weinbaum presented a fictional model for VR in his short story Pygmalion's Spectacles. In the story, the main character meets a professor who invented a pair of goggles which enabled "a movie that gives one sight and sound [...] taste, smell, and touch. [...] You are in the story, you speak to the shadows (characters) and they reply [...] the story is all about you, and you are in it."

Cinematographer Morton Heilig created Sensorama, the first VR machine (patented in 1962). It was a large booth that could fit up to four people at a time. It combined multiple technologies to stimulate all of the senses: there was a combined full colour 3D video, audio, vibrations, smell and atmospheric effects, such as wind.

Ivan Sutherland, a computer scientist, presented his vision of the Ultimate Display. The concept was of a virtual world viewed through an HMD which replicated reality so well that the user would not be able to differentiate from actual reality. This included the user being able to interact with objects. This concept featured computer hardware to form the virtual world and to keep it functioning in real-time. His paper is seen as the fundamental blueprint for VR.

Krueger's VIDEOPLACE, the first interactive VR platform, was displayed at the Milwaukee Art Center. It used computer graphics, projectors, video cameras, video displays and position-sensing technology and it didn't use goggles or gloves. VIDEOPLACE consisted of dark rooms with large video screens to surround the user in "VR".

Jaron Lanier and Thomas Zimmerman founded VPL Research, Inc. This company is known as the first company to sell VR goggles and gloves. They developed a range of VR equipment, such as, the DataGlove, EyePhone HMD and the Audio Sphere.

Mattel, Inc released the Power Glove, based on VPL's DataGlove. The Power Glove was a controller accessory for the Nintendo Entertainment System but it never took off as it was difficult to use.

The Virtuality Group launched Virtuality. These were VR arcade machines where gamers could play in a 3D gaming world. This was the first mass-produced VR entertainment system.

A Virtuality pod featured VR headsets and real-time immersive stereoscopic 3D images. Some of the machines could be networked together for multi-player games. Eventually some of the very popular arcade games, like Pac-Man, had VR versions.

Nintendo launched the Virtual Boy console which played 3D monochrome video games. It was the first portable console to display 3D graphics. But it was a commercial failure due to: the lack of colour graphics, lack of software support and it wasn't comfortable to use. One year later it was discontinued.

Immersive Media was identified as the contractor that captured the imagery for four of the five cities initially mapped by Street View, using its patented dodecahedral camera array on a moving car.

Palmer Luckey, an 18 year old entrepreneur, created the first prototype of the Oculus Rift headset. It featured a 90-degree field of vision, which had never been seen before, and relied on a computer's processing power to deliver the images. This new development boosted and refreshed interest in VR.

Facebook bought the Oculus VR company for $2 billion. This was a defining moment in VR's history because VR gained momentum rapidly after this.

Sony announced that they were working on Project Morpheus, a VR headset for the PlayStation 4 (PS4).

Google released the Cardboard - a low-cost and do-it-yourself stereoscopic viewer for smartphones.

Samsung announced the Samsung Gear VR, a headset that uses a Samsung Galaxy smartphone as a viewer.

More people started exploring the possibilities of VR, including adding innovative accessories, for example Cratesmith, an independent developer, recreated a hoverboard scene from Back to the Future by pairing the Oculus Rift with a Wii's balance board.

By 2016 hundreds of companies were developing VR products.

Most of the headsets had dynamic binaural audio.

Haptic interfaces were underdeveloped. Haptic interfaces are systems that allow humans to interact with a computer using their touch and movements - like the Gloveone gloves that were being developed. This meant that handsets were typically button-operated.

HTC released its HTC VIVE SteamVR headset. This was the first commercial release of a headset with sensor-based tracking which allowed users to move freely in a space.

At Facebook F8, Oculus demonstrated a new headset prototype, the Half Dome. This is a varifocal headset with a 140 degrees field of vision.

Virtual reality has significantly progressed and is now being used in a variety of ways, from providing immersive gaming experiences, to helping treat psychological disorders, to teaching new skills and even taking terminally ill people on virtual journeys. VR has many applications and with the rise in smartphone technology VR will be even more accessible.

*Timeline and info from Virtual Speech.